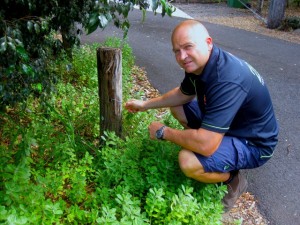 The first sign of termites that a homeowner might notice could be a swarm of insects inside the house during the spring months. However, winged ants swarm also. How can you tell whether the insects are ants or termites?

A. Termites have no apparent waist and straight antennae. Though the insects are similar there are differences. Both have two sets of wings, but the ant wings are generally two different sizes. The termite appears to have a straight body line and the ant appears to have a waist.

Homeowners can also look for mud tubes, another sign of termite infestation. The tubes can extend up to 100 meters. What are these tubes generally constructed from?

A. Faeces, plant matter and soil. Termites use these tubes to travel through unprotected areas from their nest to the food source. The tubes provide protection from predators, sun burn, and dehydration.

Termite colonies are composed of three general castes, each with a specific job and dependent upon the others to fulfill their functions. What are the three castes?

A. Reproductive, Soldier, Worker.  The worker caste is the largest portion in any colony and fairly evenly divided between males and females. The workers collect the food, feed the other castes, and construct tunnels, as well as repair and enlarge the nest.

A queen termite can grow quite large compared to the other colony members and lay thousands of eggs per day. Who does the queen mate with?

A. The King termite.  In a termite colony, unless very small, there are usually several queen and king pairs which mate and produce eggs.

Termites eat wood for cellulos. What other item in your house might be a food source for termites?

A, Books. Termites can also eat paper, cloth and carpets.

Can Termites be a danger to humans?

A. Termites cannot transmit disease to humans, however,  termite damage can be a safety concern. They can hollow out a piece of wood but leave a shell which looks safe to walk or sit on.

Termites need moisture to survive and will die if exposed to sunlight or open air for more than a few minutes.

Termites swarm in the spring the ‘swarmers emerge from the nest, then land to shed their wings and mate to begin new colonies?

Swarming termites are a sure sign that there is an infestation nearby?

Termites feed on each others faeces?

Termites represent an ant more so than a cockroach?

Do Termites Hibernate in Winter?

If Termites are in Trees in your backyard they won’t infest your house?

How often should you have a termite inspection of your home?

If my neighbour has a termite infestation and has termite protection system put in, could the termites be forced to my property?